So starts a new week.

That’s one of my favorite things about Monday, you know. The fact that it is the beginning of a new week. I suppose I could say that my week actually starts on Sunday. Sundays are one of the busiest days out of the week for me and my family because of church and church activities.  So I prefer to look at Monday as my start with Sunday as something of an in between.

These are some of the things this week will hold.

In fairness, this was supposed to be announced on the 18th. But they needed more time to figure this out. So it’s very much a hope that they will make the announcement this week, not a guarantee.

*phew Cue the rattling of xylophonic nerves clanging up and down my back. I’m vacillating between happy thoughts and worst case scenarios.

On the bright side, all nine of my competitors are lovely people. I’m not going to pretend I don’t want to win (I do), but there is comfort in knowing that no matter who wins, the grand prize is going to someone I like. (One of the downsides of competing too much with your enemies is that if you lose, it smarts doubly.)

Either way…it’s going to be all right. More great opportunities to practice patience, trust, and think with joy.

I hadn’t done it intentionally but I have drafted a short story each week this month. Actually I’m up to five at this point.

For the longest time, writing short stories was almost impossible for me. They kept growing and expanding, and over the past few months, it has suddenly become much easier. It’s always been true that short stories are capsules of a larger tale. They are a window that we use to look in on a small bit of a character’s life. But, perhaps it was greed or ignorance or both, I always struggled to get this into my stories.

I would start off with a short and then, as I reached the main points, it expanded. Sometimes writing is like wrestling an anaconda that’s in the middle of a growth spurt. I have realized that I am dreadful when it comes to accurately estimating how many words are needed in a story.

But I am getting better at cutting a story off and saying, “no, no, it’s enough to look at this point. I don’t have to catch it all. Just this portion.” And when I find myself resisting this, I remind myself that I can always come back and reveal more of the story later. Setting many of these shorts in the same world has also reduced pressure. 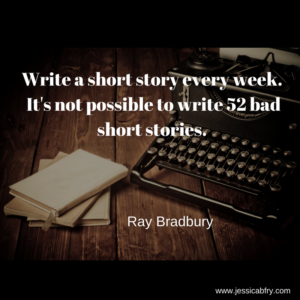 Ray Bradbury once said, “It’s not possible to write 52 bad short stories in a row.” I can be a bit of a contrarian. But I’m hoping in this case, he’s correct.

Catch Up With the Paperwork

Maybe I’ll never really be caught up. Each day I try to take five minutes and clear off my work space, file the papers I have, and prep for the next day. The key word here is try.

If you could see my desk right now. I have three mugs, two water bottles, a stack of five notebooks, the checkbook register, and a mass of loose leaf papers. Not to mention a dozen or so pens and pencils clattering around my laptop and probably four or five cat toys I can’t even see.

Paperwork, particularly on the law firm side of things, always backs up. Not that it’s so good on the writing side of things. I have a whole box of notebooks that need to be transcribed. A few of my novels are hand drafted in there, and they have no backups. Prince of the Waters Below, Phoenix Shattered, Why Am I On a Quest with a Minotaur, String of Pearls, and a couple others are hopefully in that bin. I’m not entirely certain.

Anyway I’d like to get the mountains under control. All the loose leaf paper is probably the highest priority, particularly given that my cats like skiing through the mounds of paper.

For Mercy’s Sake, Woman, Promote Something

I am actually taking a couple courses that help with promotions and advertisings. And I just have to get over this hump. It’s utterly psychological, and even though I don’t feel like other authors who do this are horrible, some secret part of me must believe that I will become some greasy haired, mustachio twirling troll (and trust me, I don’t look particularly fetching in a mustache).

So I figure I’ll tackle this the same way I tackled running and spiders. One little step at a time. Scream. Flail. One more step. Repeat.

I thrive having multiple projects to work on. When I get stuck on one, I slide over to the next one. The one downside to this is that I have many projects open, and I would like to get some of them done.

Sometimes having multiple projects open like this makes me feel overwhelmed when combined with other situations. So…it’d be nice to wrap some of these up more.

Anyway, it’s going to be a great week. I have many more goals, but these are just some of the highlights. What about you? What are you looking forward to in this next week for you?